Seven athletes heading to Denmark to represent Canada at the World Cross Country Championships on March 30 headline the field for Saturday’s St Patrick’s Day 5K presented by BMO. Looking for some four leaf clovers to take with them will be Natasha Wodak, Regan Yee, Erica Digby, Lindsay Carson, Evan Esselink, John Gay, and Justin Kent. The race also serves as the 2019 BC 5K Championship, the fourth race in the BC Super Series, and the second race in the Lower Mainland Road Race Series.

Last year the top 75 finishers ran under 17 minutes, fulfilling race organizers Karen Warrendorf and Steve Mattina goal of making this Canada’s most competitive 5K race. This years race should be no less competitive. 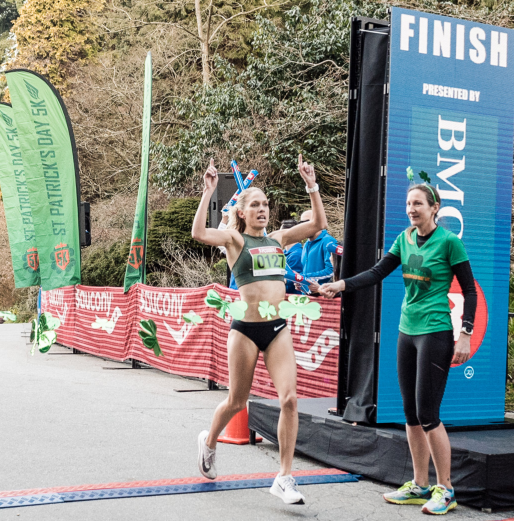 2016 Olympian Natasha Wodak recorded the fastest 5K ever run on the roads in Canada when winning this race in 15:39 last year, before going on to capture the Canadian 5K Championship in September. If she can better her time this year, she’ll earn a $250 bonus courtesy of Saucony on top of $300 for the win. Capable of pushing her to that time are a trio of women who ran 5000m indoor personal bests in that range this winter. Regan Yee ran 15:35.28, while her Langley training partner, Scotland’s Sarah Inglis ran 15:35.89. And Erica Digby ran 15:42.20. None are strangers to the St Patrick’s Day 5K – Inglis was 3rd last year, Yee was 2nd in 2017, and Digby was 3rd in 2016.

New to the local running scene is Shalaya Kipp, who represented the USA at the 2012 Olympics in the 3000m Steeplechase. Kipp recently moved to Vancouver to undertake PhD studies in Kinesiology at UBC. Also in the mix will be the aforementioned Lindsay Carson, Robyn Mildren who had a breakout 1:13:21 half marathon in Houston in January, and Kirsten Lee having run a 3000m PB indoors in February.

The men’s race will be equally compelling. Ontarian Evan Esselink moved to Vancouver in the fall to train with the BC Endurance Project. Esselink placed 4th at the 2018 Canadian 5K Championships in 14:26, and more recently ran an impressive 1:02:17 half marathon in Houston. Last year’s 3rd placer, John Gay, broke 14 minutes for 5000m indoors last month, clocking 13:57.04. And Justin Kent finished one place behind his training partner Esselink at the Canadian 5K Championship, and this winter ran 14:04.22 for 5000m indoors.

At the other end of the spectrum, Marilyn Arsenault will take a shot at her own Canadian F5054 record of 17:43.

The men’s course record is 14:12, set by Lucas Bruchet last year, which if broken earns the winner a $250 bonus from Saucony. In addition, $150 is up for grabs courtesy of RunGo for the first male and female through the mile, provided they continue and finish within 1 minute of the race winner.

While the serious athletes may have the BC Championship as their goal, many more will come dressed in costume, and will stay for the Irish themed after-party. Proceeds from the event benefit the Diabetes Canada, with over $100,000 donated to date.

The lead runners will be chasing a Maserati pace car, courtesy of Ferrari Maserati of Vancouver. The race will be started by the newly crowned Canadian Marathon record holder, Rachel Cliff, at 9:30am on Pipeline Drive, and circles around Brockton Point, before finishing back up Pipeline to the Stanley Park Pavilion.